The Number One Myth about GMOs 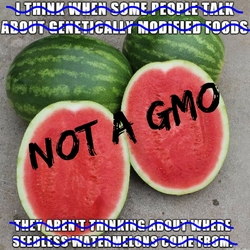 Farmers have been modifying plants through crossbreeding for thousands of years to get the most desirable traits. This process can be lengthy and produce varying results. Modern genetic modification allows scientists to select a naturally occurring gene and insert it into the plant genome. This process is much more precise and keeps existing traits the same, which is not always possible in crossbreeding.

So those looking perfect looking tomatoes, extra large strawberries, and seedless grapes must be GMO, right? The fact is that only 9 GMO crops are commercially available. Each of these crops has been put through more than a decade of testing, and is approved by the FDA, EPA, and USDA before they ever reach your grocery store.

Each of these varieties was created for a specific purpose. At our farm, we do grow GMO corn that is fed to our cattle.  Over the years we have not seen adverse effects in our cattle, but we have seen the positive effects of higher yields and less pesticide use. Overwhelmingly scientists agree, 88% say that GMOs are safe2.

If you still have questions, that’s ok! I would never suggest that you should take me at only my word. Do what I did, do some research, talk to farmers, and read the opinions of scientists about GMOs.  The only thing you shouldn’t do… believe everything you read on Facebook.

Did you miss this week's Farmer's Daughter radio segment? Listen to it here: SD_Farm_Families_-_Farmers_Daughter_Sept12th.mp3