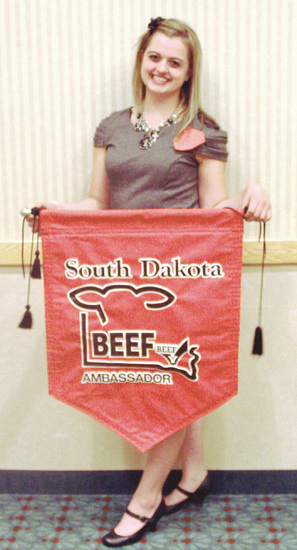 HURON (July 28, 2012)—A beef producer from Big Stone City was named the South Dakota Beef Ambassador at the state-wide competition in Huron on July 26. Emma Christensen, who will be a freshman this fall at South Dakota State University, majoring in Ag Business, is a 2012 graduate from Milbank High School and the daughter of Roger and Sandy Christensen.
“I’m absolutely thrilled to be named the state’s Beef Ambassador,” said Christensen, who grew up helping raise Simmental and Angus beef on her family’s farm and is beginning to develop her own herd. “I am excited to be the voice of other producers and help communicate the truth about beef and the beef industry to consumers and youth.” In her role as South Dakota Beef Ambassador, Christensen will travel the state promoting beef. She will also represent the state at the National Beef Ambassador Contest in the fall of 2013.
The Beef Ambassador program is focused on providing youth with the resources and skills to be informed and effective spokespersons for beef and the beef industry says Holly Swee, the director of nutrition and consumer information for the South Dakota Beef Industry Council (SDBIC), one of the primary sponsors of the Beef Ambassador program. Directing checkoff dollars into youth programs like the Beef Ambassador program is especially important, she insists, in an age of instant online communication when misinformation about the industry can have immediate and negative consequences.
“We must invest in our youth and properly equip them to be effective advocates for the industry,” she adds. “The Beef Ambassador program helps our young people know the facts about beef and the beef industry and be able to answer tough questions about production practices or nutrition that they’ll face in today’s social environment.”
In addition to Christensen, who took first place in the senior division (ages 17-20), Kiera Leddy, daughter of Donnie and Krecia Leddy of Stockholm, took first place in the junior division (ages 12-16), and Sawyer Naasz, daughter of Tim and Sandy Naasz of Platte, took first place in the beginner division (ages 8-11).
Contestants in the senior and junior divisions were judged on their performance in four different settings: a personal interview, media interview, consumer promotion event and a written response to a recently published news article regarding the beef industry. Overall excellence in each of the four categories was also recognized, with Christensen winning the personal interview and written issue response categories and Kiera Leddy winning the media interview and consumer promotion categories. In the beginner division, contestants gave a three to five-minute beef-related presentation.
As the senior division winner, Christensen receives an all-expense-paid trip to the 2013 National Beef Ambassador Contest and a $500 cash award. All contestants received cash awards from the SDBIC as well as additional cash and prizes from the South Dakota Cattlemen’s Auxiliary and South Dakota CattleWomen.
Chelsey Cahoon, the 2012 South Dakota Beef Ambassador, will be representing the state at the National Beef Ambassador Contest this September in Sacramento, CA. Cahoon, of Beresford, is the daughter of Barry and Vicky Cahoon.

The SDBIC collects and administers the $1 Beef Checkoff on cattle sold in South Dakota.  Checkoff dollars are utilized strictly for promotion, education or research programs.  Fifty cents of every dollar is directed to the Cattlemen’s Beef Board for programs on the national level.  The SDBIC retains 50 cents, which is invested in additional national programs or in-state programs.

Captions:
Emma Christensen was named the South Dakota Beef Ambassador at the competition in Huron July 27. Christensen, of Big Stone City, SD, was the winner of the contest’s senior division.

The following photos are available upon request. Pleasecontact Connie Smith, cmsmith@siouxvalley.net or call 605-270-1097.