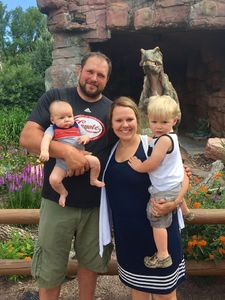 September has arrived, along with cooler temperatures, schools underway and leaves will soon start to turn fall colors.  It also means the attention of many South Dakotans will be focused on high school football fields across the state every Friday night.

While high school athletic careers last only four years, the lessons learned in football, basketball, softball and other activities, often shape young people and prepare them for challenges they will face in life and careers.

This was true for Brian Alderson, a fourth generation farmer and cattle feeder from Hartford, South Dakota.  He was a standout player on state championship teams at West Central High School, and an All-American player at the University of South Dakota.

“One of our coaches would always tell us that at every game, for 50 percent of the people, it will be the only time they see you play, so give 100 percent and be your best self every time,”  said Brian.  “That applies to a lot of things in life, including farming.”

He notes that every decision a farmer makes in raising his crop or cattle can make a difference in plant or animal health and the farm’s profitability.  In addition, many people will make a judgement about farmers and agriculture from one visit, driving by a farm or what they see online.

“Everyone will be forming an opinion of you, so you have to decide how you want to present yourself and work towards that goal,” he said.

Brian began farming with his parents, Larry and Joyce, about eight years ago on the same land that his great grandfather homesteaded in 1876.  He has been farming on his own for six years.  He married his wife, Erin, in 2013, and they now have two children:  Evan is two years old, and Lincoln is four month old.

He has worked to expand the farming business through renting additional acres and building a hoop barn to raise cattle.  The barn allows Brian to keep cattle protected from weather all year long and better manage their health and feeding. He currently raises Holstein steers.  His sister and brother-in-law farm and raise dairy calves and heifers as well.

Brian worked in several industries after college, including facility tryouts with Oakland Raiders, then returned to the family farm when his father had some health issues.

“I never knew I was a farmer until I tried to do other things, then came back to the farm,” said Brian.  “It is a good fit for me.  I like working with numbers and trying to pencil out options to make things work.”

Especially in an environment of low commodity prices, farmers like Brian are taking careful approaches to many decisions.  For example, Brian hires custom operators for some planting and fieldwork, which allows him to have the benefits of the latest precision agriculture technologies without investing in equipment.  He also shares labor with another farmer who owns a silage chopper.

For Brian, the biggest benefit of farming is the opportunity to run his own business and be an entrepreneur, as well as to raise his young family on the farm.  He has worked to overcome challenges involved, including volatile markets, but is positive about the decision to farm.

“For me, farming is the best way that I can step in and be my own boss, but also work with my family and neighbors and be part of a community,” he said.

Click here to see more of Brian’s story in the “Where Are They Now” feature on KSFY news.