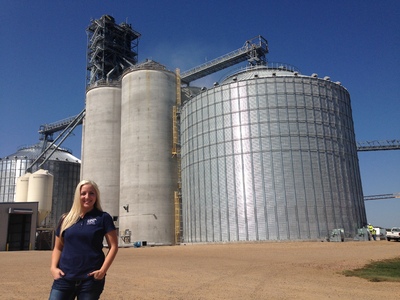 Farm families across rural South Dakota are wrapping up another bountiful fall harvest season, thankful for good weather and strong yields across most of the state.

The fall harvest means long hours for farm families as well of thousands of other South Dakotans who work to make sure the harvested grain is tested, stored and shipped to customers in the state and around the world.  In 2014 alone, South Dakota farmers raised more than 787 million bushels of corn and nearly 230 million bushels of soybeans.

Megan Herlyn is a grain originator at Central Farmers Cooperative in Lyons, South Dakota, where she works with farmers to purchase the grain they harvest.  For Megan, working at the elevator allows her to continue her passion for agriculture that she developed while growing up on her family’s farm near Marion.

“My sisters and I spent a lot of time helping my dad with chores around the farm,” said Megan.  “Whenever we had a problem with a job, he would encourage us to keep trying and find a solution. ‘Can’t’ wasn’t a word that we could use on the farm,” she said.

Megan began working at Central Farmers in 2012 after graduating from Northwestern College in Orange City, Iowa, with a degree in Finance.  Megan is one of an increasing number of women who are finding professional success in agricultural careers.  Whether as an active partner in a farming or ranching operation, or in an agricultural sales, service or research industry, the opportunities for women in agriculture continue to grow. In fact, according to the most recent USDA census, nearly 30 percent of U.S. farmers are women.

The work ethic Megan learned on her family’s farm has carried over to her career, especially during the busy harvest season.

From early October through mid-November, Central Farmers Cooperative’s Lyons location will take delivery of about 7 million bushels of corn and 2 million bushels of soybeans.  They will take in about the same amount throughout the year from farmers who stored their harvested grain on their own farms first, then bring it to the elevator to sell at a later date.

The Lyons elevator is one of seven Central Farmers Coop elevators in eastern South Dakota.  It was completed in 2012, with the facility designed to quickly unload trucks, as well as to easily load the trains that will carry grain to its final destination.

“We have a specially-designed circle track and loading system that allows us to load a 110 car train with more than 400,000 bushels of grain in less than eight hours,” said Megan.

Because of the location’s rail loading system, most of the grain that comes into Lyons is shipped to the west coast for export markets.  Some is also sent to Hereford, Texas, for livestock feeding or to dairies in California, said Megan.

“This area grows great quality crops and we often see areas that request our grain,” she said.

Roughly half of the corn crop in the U.S. is fed to animals and poultry.  Another important market is for ethanol production, which produces fuel as well as distillers grain used in livestock feed.  About 10 percent of the crop is used in food ingredients.  The raw materials of corn- starch, protein, fiber and oil – are versatile, which is why corn is an ingredient in many food products.

Whether the end customer for the grain is a cattle feeder, food processor or ethanol producer, they all expect a high quality product.  Each load of grain brought into the elevator –whether it is straight from the harvested field or stored in a farmer’s bin – is weighed on a scale and samples from each truck are tested.  Employees also examine the grain to make sure it isn’t damaged.

“Machines can test how dry the grain is and what the test weight is, but it still takes a person to look at and smell every sample,” said Megan.  “The testing process is complete before the truck leaves the scale so we know exactly what we are bringing into the elevator.”

Grain is tested again before it is loaded to railcars and shipped out of the elevators, this time by federally certified grain inspectors. 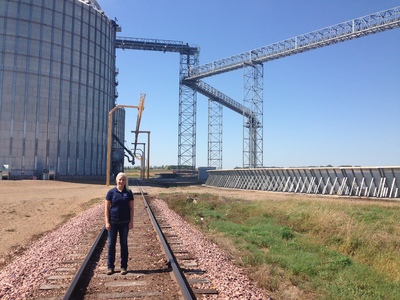 An important part of Megan’s job is working with farmers to develop a strategy for marketing their grain.  Like the stock market, grain prices change every day based on weather, demand and other factors out of a farmer’s control.  And, since crops like corn and soybeans are only harvested one time per year, it is crucial to make the right decisions.

“There are a number of contracts and other tools that we can use to help farmers make sure they are covering their expenses and earning income to continue their business and support their families,” she said. “They work all year to produce a good crop and my job is to provide the best service I can to help market the grain.”

Even though Megan is busy at the elevator, she finds time to go back to her family’s farm to help with harvest each fall.

“I enjoying working with my family and knowing that the effort we put in now will help grow the family business for years to come,” she said.