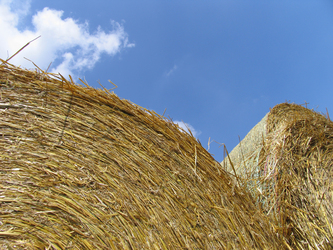 We’ve had a beautiful summer so far, but this time it seems like the heat is back to stay.  Although it can make doing chores on the farm miserable, it means it’s the perfect time for making hay!

Putting up hay means that we are spending a lot of hours in the tractor. But to make sure the hay is a good quality feed and won’t spoil, it has to be put up at exactly the right time.  That means when the time is right, you spend as much time in the tractor as you can making bales. We all know the weather can change in an instant here in South Dakota.

It would seem that hay is hay, right? It gets cut, dried, put into rows, and baled. How much more could there be? However this year, we are putting up three different types of hay. Oat, alfalfa, and grass hay are getting ready to be put in bales and stored for the winter.  Each type of hay has a different nutritional value and will be used in a different way.

Oat hay – Oats are high in protein and energy. Baling the stalk and the seeds

Grass hay –  This type of hay doesn’t provide as much nutritional value, however

it is useful as a filler in the ration and keeps the cattle full.

important part of the cattle diet.

Although we’re all suffering through the heat this week, I know that it’s a blessing in disguise. Because of the heat, we’re making hay!