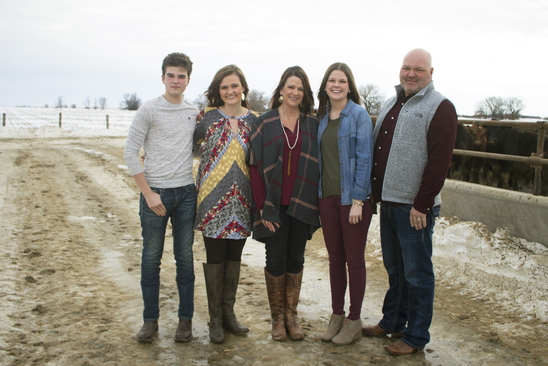 For Brandi Pravecek, the health of farmers, families and rural communities are all connected.  Brandi and her husband Frank farm and raise livestock in southeastern South Dakota and she is also a nurse practitioner and an instructor in the College of Nursing at South Dakota State University.  Her background gives her a unique perspective and provides an opportunity to help friends and neighbors understand livestock production in the state.

Frank Pravecek grew up on his family’s farm near Scotland, South Dakota.  He and Brandi have been married for 24 years. They raise corn, beans, and alfalfa. They also raise feeder cattle and have two 2,400 head hog barns.

“Frank comes from a long line of farmers; I always tell him farming is in his blood,” said Brandi.

The Praveceks have three children. Brooke, will graduate from South Dakota State University this spring with degrees in entrepreneurial studies and ag business. She and her fiancé are planning to join the family farming business after graduation.  Allison, is a freshman at SDSU pursuing a degree in elementary education, and Derek is a freshman in high school in Scotland.

“Farming is hard work and can be so unpredictable.  Yet to see our oldest daughter make the decision to return to the farm and raise her future family here is worth the hard work and the gamble that farming often entails,” said Brandi.  “For us it is a way of life that we wouldn’t trade for anything.”

Brandi has worked in healthcare in rural clinics and hospitals for more than 20 years.  She earned a BS in nursing in 1993 from SDSU. She worked as a registered nurse in a local rural hospital before returning to school to earn a MS in nursing in 2002 and become a certified family nurse practitioner.  She is currently pursuing a doctorate of nursing at SDSU with plans to graduate in a year.  Brandi is also an instructor in the College of Nursing at SDSU but continues to practice as a nurse practitioner in Scotland and throughout eastern South Dakota for a locum (temporary) provider company.

Some of the listening and communications skills that Brandi has developed as a nurse practitioner have been valuable in understanding concerns and answering questions that people have about their farm and livestock barns.

“I have learned that it is very important that I listen to what people are telling me, whether they are describing their symptoms, feelings, or other concerns they might have. Many times people just want to be heard and understood and leave knowing what they said is important,” she said, noting that it is particularly relevant when sharing information with neighbors and the community about our farm, particularly related to livestock production.

“My current role as an educator and doctoral student at SDSU has helped me to be able to present information and provide knowledge to others that is factual and evidence based,” she said.  “I believe that everyone is entitled to their own opinions and perceptions but want to be sure people have the necessary knowledge to make informed decisions, and not make decisions based on fear or emotions.”

In 2016, a proposal was introduced for the county zoning board to restrict the expansion of livestock facilities in Bon Homme County.  Brandi noticed that supporters of the proposal had made claims at meetings and in newspaper editorials that CAFOs (confined animal feeding operations) as well as other large livestock units would cause people to develop disease and illness, specifically MRSA related infections, and would contaminate the local water supply.  She started reviewing the research and studies that had been done on this topic and talking to livestock leaders at SDSU.

“I found that these claims were not evidence based, but rather designed to create fear and cause people to react on emotions, not facts.  As owners of a feedlot and two hog barns, my husband and I both felt it was important to educate people regarding CAFOs,” she said.

After researching the issues, Brandi spoke at a zoning board meeting, presenting information that dispelled concerns.  She urged people to read the research before forming opinions or making decisions about livestock.

“As a healthcare provider, it is important to me that people know they can trust me and that I have their best interest at heart,” she said. “I think my efforts to educate others about CAFOs and livestock have been well received as people understand I would never support anything that would cause others harm.”

She also discussed the important role that these livestock facilities play in bringing young people back to rural farming communities, ensuring the survival of small town schools and businesses.

“Farm families play a vital role in our local communities in South Dakota.  Many small town businesses rely on goods and services purchased by our farmers,” she said.  “Scotland is fortunate to have many young farmers returning to this area after college, our daughter being one of them.  These young families are important in keeping our school open and thriving and supporting our local economy.”