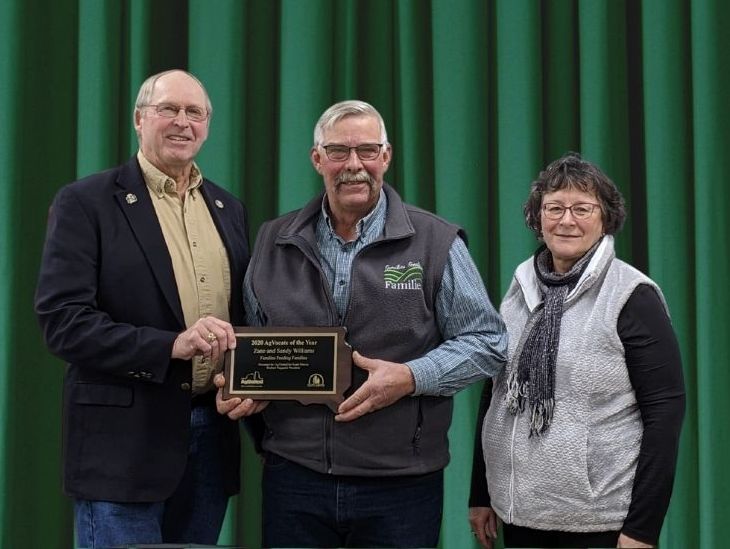 Featured Farmer: Zane and Sandy Williams, 2020 Agvocates of the Year

The Ag United board of directors named Zane and Sandy Williams of Irene, S.D., as the 2020 AgVocate of the Year in recognition of their commitment to promoting agriculture and livestock production and role in founding a new advocacy group in Yankton County.

The seventh annual AgVocate Award recognizes South Dakotans for their work in sharing their story of modern farming with the public. The Williamses were involved in the founding of Families Feeding Families – AGvocacy! which is a group of family farmers in southeastern South Dakota who work together to host events and share information about how they raise animals and care for the land they farm.

“I’ve known Zane and Sandy for a number of years and have admired their tireless commitment and drive to share information about modern day agriculture,” said Richard Vasgaard, Centerville, S.D., farmer and president of Ag United. “Agriculture and livestock production are critical to our state’s economy and rural communities, and voices like theirs are important to telling our story.”

The following profile, originally published in March 2020, shares more about their farm and commitment to South Dakota agriculture

Livestock Have Been Important for Generations on South Dakota Farm

The farm that Zane Williams’ great uncle homesteaded 125 years ago has changed over the years, but there has been one constant: livestock have always been an important part of the farm for each of the four generations that have lived there.  “In 125 years on our farm, we have never sold corn off the farm. The corn we raise always gets fed to livestock, whether that is dairy cows, beef cattle or hogs,” said Williams.

Zane and his wife Sandy live near Irene, South Dakota, in Yankton County, where he feeds cattle and raises corn, soybeans and hay. He specializes in raising high quality alfalfa hay for dairy farms. Williams is also a member of the Yankton County Planning and Zoning Commission and one of the founding members of the Families Feeding Families-AGvocacy! group that shares information about agriculture with area students and community members.

Williams grew up on the family’s dairy farm. He was the youngest of five children, and his father had health issues, so he began taking a lot of responsibility on the farm at a very early age. He operated his own dairy farm until 2001, then raised Holstein heifers for other dairies. He has also raised pigs and and continues to raise beef cattle.

Each year, Williams raises about 500 acres of hay, which is baled into large square or round bales and sold for feed for dairy cows or beef cattle. Timing and weather are important elements to ensure that the hay is the highest quality. He also stores square bales in sheds to preserve quality before they are trucked to dairy farms.

“The last few years, the weather has been very challenging,” he said. “During the summer, we’re constantly looking at the weather forecast for the next two weeks to see if we can find a stretch of days that will stay dry.”  Williams tries to get four or five cuttings of alfalfa off each field during the growing season, harvesting each field every 27 to 30 days. After it is swathed, the hay lays in the field for a few days to dry down to the right moisture content, then is raked and baled.  “We do everything we can to preserve the hay and get it dry so it will provide the best feed value for cattle,” he said. “Constant rain and high humidity make that very difficult.”

He has been a member of the Yankton County Planning and Zoning Commission for several years. The commission is responsible for reviewing applications and information on plats and building projects throughout rural areas of the county; including new or expanded facilities for raising livestock.
“Adding livestock production to a farm often gives the family’s next generation an opportunity to join the farming business”, he said, noting that it is important for farmers to stay in communication with their neighbors and be proactive when considering new barns for their farms. A number of resources are available to farmers as they plan and design facilities to ensure that they meet zoning requirements, as well as provide the best environment for animals and preserve natural resources.

Williams is also involved in Families Feeding Families-AGvocacy! which is a group of family farmers that include livestock producers and grain farmers who work together to share information about how they raise animals and care for the land they farm. “As people, even here in South Dakota, are many generations removed from living on a farm, it is more important than ever that we talk about what we do,” he said. “The technologies and tools we have today mean farmers can take better care of their animals and land, and raise food more efficiently, but that also requires farmers to make a huge dollar investment.”