Scott VanderWal is the third of four generations of family members that have been living and farming near Volga since the 1940s.  While their roots run deep on the family farm, they have also built connections across the state and beyond to support South Dakota farmers and improve their own farming and business practices.

Scott’s grandfather started farming in the 1940s, and his father Edward and uncle Ray incorporated the family farm in 1971.  Scott joined the farm when he graduated from college. They raise corn and soybeans and feed beef cattle. 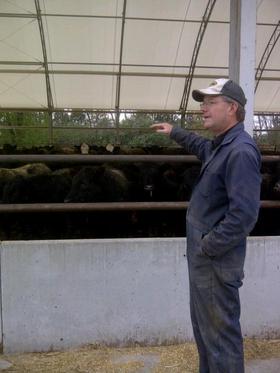 “We have three generations working together every day,” said Scott, noting that his father continues to do feedlot chores and his son, Kyle, has now joined the farming business.

The VanderWals have adopted a number of practices on their farm to increase production and provide better care for their animals and environment.

Technology in crop production has advanced quickly, said Scott.  Starting with yield monitors in the combine to autosteer, variable rate seeding and fertilizer applications, and shutoffs for sprayers and planters, farmers are now able to be more precise with inputs to save costs and minimize the inputs they need to raise a crop.

“It is a wise use of resources.  We can develop prescriptions for a field’s fertilizer needs, then only apply what is needed in each area,” he said.

The VanderWals also feed about 1,000 beef cattle on their farm in three barns.  The first barn was built in 1978 and has concrete slats over a pit to collect manure.  In 2010, they installed rubber mats to the floor of the slatted barn to increase cattle comfort in the building.  They also built two hoop barns in 2009 to move cattle in from outside lots.

Scott is also very active in agricultural organizations, having served as president of South Dakota Farm Bureau since 2004.

“You could say I grew up in Farm Bureau,” said Scott.  His father was county president when he was growing up.  After Scott and his wife Michelle were married in 1985, they became involved in the county Young Farmers & Ranchers program.  They served in leadership roles in the program in South Dakota and at the national level. 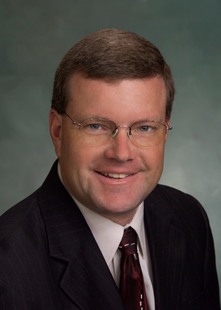 “It has been a tremendous opportunity to constantly build leadership skills,” said Scott.  “Every time we get together with peers from around the state or country, we share information that helps improve our own farming businesses.”

Scott then served on the Farm Bureau board at the county level, and eventually was named to the state board and was elected President in 2004.  He has also served on the national board of American Farm Bureau since 2006.

Scott has also been involved with Ag United for South Dakota since the organization’s beginning, serving as its first board President in 2005.

“We started with five organizations with a common goal, but not exactly sure how we were going to accomplish it.  After several planning sessions, we made good progress,” said Scott.

Scott said some of the founding goals of Ag United were to help farmers and ranchers through the permitting process for their livestock farms, and to share information with consumers about modern agriculture and livestock production.

“Over the years we’ve worked hard to get people out to farms to meet farm families and see firsthand that we care for our animals and land,” said Scott.  “There are lots of misconceptions about agriculture, so it is important to show that the practices we use to raise animals have been proven over the years to not only maximize production, but also maximize animal comfort.”

Scott sees the challenges to modern agriculture continuing to grow, which means that organizations like Ag United for South Dakota, as well as similar groups in other states, and the U.S. Farmers and Ranchers Alliance at a national level, will become increasingly important in sharing agriculture’s story.