Adapting their farming and ranching business to meet consumer and food processor needs has enabled the Eisenbraun family to not only farm the same land near Wall, South Dakota, for seven generations, but also to preserve and improve the soils for the future.

Scot Eisenbraun was raised on his family’s farm and began operating it in 1991.  He now farms with his sons Tyrel, Taran and Tate. They raise a number of crops – winter wheat and spring wheat, corn, millet, yellow edible peas and three types of sunflowers – as well as beef cattle.

Tyrel and his wife, Kassidy, have three sons, Landon, Declan and Griffin, and Taran and his wife, Tayah, have a daughter, Tinley. The grandchildren are the eighth generation to grow up on the farming and ranching operation.

Wheat has always been an important crop in western South Dakota, but Eisenbraun has looked for other crops that can be included in the rotation. He began planting sunflowers 15 or 20 years ago.

“Without sunflowers, we probably wouldn’t be farming anymore. It provided an opportunity for higher profits if the sunflower crop meets the quality requirements for the confectionery market,” he said. They have continued to grow acreage and now raise sunflowers for a variety of uses.

For the past five years, they have also grown yellow field peas, which are a high protein edible legume which can be sold for human consumption or livestock feed. Yellow field peas are used in a number of the plant-based protein products that have been introduced in recent years. The Eisenbrauns raise field peas for food markets, and also raise certified seed for sale to other farmers.

“We have a five-year crop rotation for each of our fields. We start with planting winter wheat, then the following years that field is planted to sunflowers, then spring wheat, then corn, and finally yellow field peas,” said Eisenbraun.  “The rotation between broadleaf crops like sunflowers and peas to grass crops like wheat and corn help break disease cycles and build soils and crop productivity. If you grow the same crop on the same field year after year, it can lead to issues.”

Rotating crops is especially important in the Eisenbrauns’ no-till farming system. By not using tillage after a crop is harvested, crop residue remains on the surface to better hold water and nutrients and protect soil structure.

Scot is a board member of the Dakota Lakes Research Farm, which he credits for conducting research that has allowed no-till farming to be possible in the region.  The farm is a non-profit entity owned by farmers and managed by board members, with a goal of identifying, researching, and demonstrating methods of strengthening and stabilizing the agriculture economy.

“Dwayne Beck and the research farm have been working on ways to preserve and make soils better for 40 years,” he said.

The family also raises black Angus and red Angus cattle. They have a small registered herd to sell bulls to other ranchers to grow their herds, but the majority of cattle raised go to beef production. They raise all-natural beef, meaning that cattle do not receive additional growth hormones or antibiotics.

Scot is also a partner in Red Rock Restaurant in Wall that features locally-raised beef and pork dishes. The restaurant sources meat from Eisenbrauns and other local ranchers and livestock producers and processes animals at Wall Meat Processing.

He is a board member of the South Dakota Farm Bureau Federation, as well as active in his church council and in promoting agriculture in the community.

“Everything we put in our mouth comes from the ground, whether is wheat, sunflowers or peas used in food market, or livestock feed that eventually becomes beef, pork or other meats,” he said. 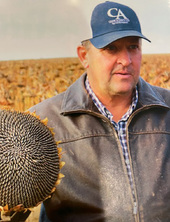