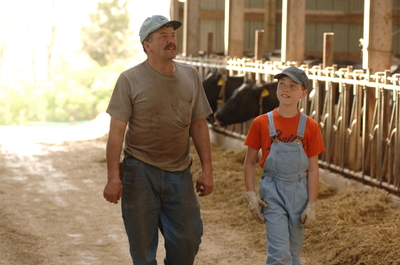 Ron Krogstad and his family own and operate a dairy farm and raise crops near Baltic in Minnehaha County.  He’s seen a number of changes in technologies and the industry in the 34 years he’s been involved in the family’s farm.

He began helping at the farm in 1979, then joined his father Ordell full time after attending South Dakota State University for two years.  They formed a partnership with Ron’s brother Craig in 1991.

The Krogstads expanded the dairy farm in 1995 from milking 90 cows to milking 400 cows in 1995.  They currently milk 400 cows three times a day.  They also raise about 600 acres of crops, including corn, alfalfa and grass hay.  Most of their crops are harvested as forages and used as feed for the dairy animals.

The farm has five full time employees, primarily doing milking and working with the livestock. They also have part time help during forage harvesting season.

Ron and his wife Kristi have been married for 28 years. They have three children.  Andrea is married to Nathan Chase and is a lawyer in Kansas City.  Amber is a first grade teacher and coach at Tri-Valley Elementary School. Scott is in his third year at SDSU majoring in Ag Systems and Technology and is a member of the Air National Guard.

The Krogstads believe in having good relationships with neighbors and community members, especially since they are so close to urban and suburban communities.  Their farm is just eleven miles from the Sioux Falls airport.

“We always try to be proactive to inform our neighbors about changes to the livestock operation in advance,” he said. “When possible we purchase corn or hay locally and also have a manure management plan approved through implementing an agreement with neighbors.”

The Krogstads also open their farm to tours for schools and many community groups.

“Minnehaha County  and South Dakota Farm Bureau are proud to team up with Ag United for South Dakota to promote accurate agriculture in our community and state,” said Ron.  “Together our voice reach a larger audience.”

“One of the most rewarding parts of farming is the ability to try new technologies,” he said.  “We have the opportunity to try new things and see how they adapt on our farm and others in the same industry.  These technologies are allowing us to help feed the world’s growing demand for better diets.”

The economic impact of dairy farming in particular, is important to South Dakota.

“Dairy farm dollars turn over many times in the community and state,” said Ron.  Research from SDSU shows that each South Dakota dairy cow generates $13,594 of economic impact to the community each year.  The state’s dairy industry is responsible for 1,800 jobs.

“We shop close to home because we want to support those businesses, but also because of the time involved.  When we need supplies, repairs, feed or other items, we often need them right away and can’t afford to drive a long distance or have something shipped,” he said.