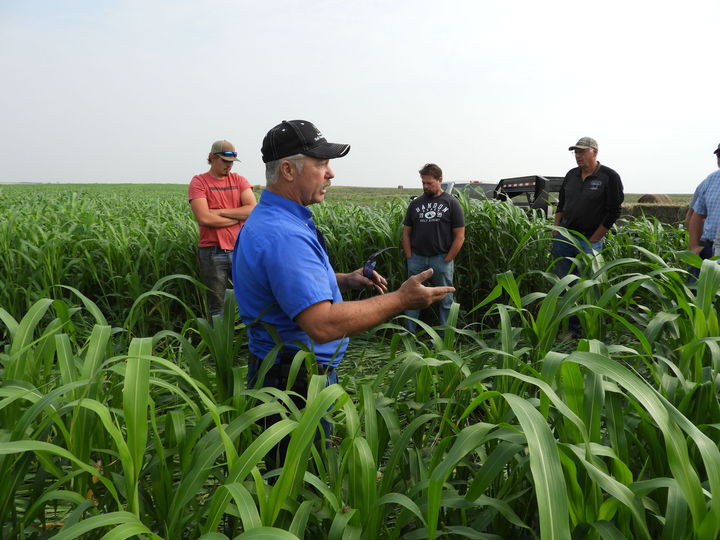 Doug Sieck is the fourth generation of his family to ranch in north central South Dakota, raising cattle and crops on Deep Root Ranch. He combines the legacy of his father, grandfather and great-grandfather, with new ideas and innovative management practices to benefit the land, animals and his business.

“We were a pretty conventional operation until about 2007 or so,” he said.  Sieck began looking into practices like reducing tillage and planting cover crops to help keep more moisture in the soils.

After touring other farms and talking to farmers and experts about the potential, they moved to 100% no-till, and added soybeans and cover crops to their crop rotation.  Since then, he has adopted a number of practices including rotational grazing, grazing of full and partial season cover crops, livestock integration, as well as rotating cover crops and deep-rooted perennials with more traditional corn, soybean and wheat crops.

“We can’t make it rain, but we can make sure that the rain we do receive stays in the ground instead of running off and going back into the creeks,” he said.  (Watch Doug demonstrate how healthier soils can hold water and nutrients in this video.)

These new practices follow the five principles of soil health, which include

“I farmed for years without really being interested in what the soil is actually made of.  We thought of it as just dirt, not living soil.  Now I’m aware that there are probably 5,000 pounds of living microbes per acre that we have to feed and manage,” he said.  “The soil has an abundance of nitrogen and phosphorous, but they are in a form that plants can’t absorb.  Microbes are the tools that we use to convert those forms of nitrogen into forms that plants can use.”

These practices are a long-term investment, said Sieck. Over the long term, producers will see payoffs with better holding of water, being able to get into fields earlier in the spring and reducing fertilizer and other input needs.  The more moisture that is held in the soil will help support growing plants during drought years as well.  But there is also trial and error and a learning curve to find out what works best on each farm and each field. 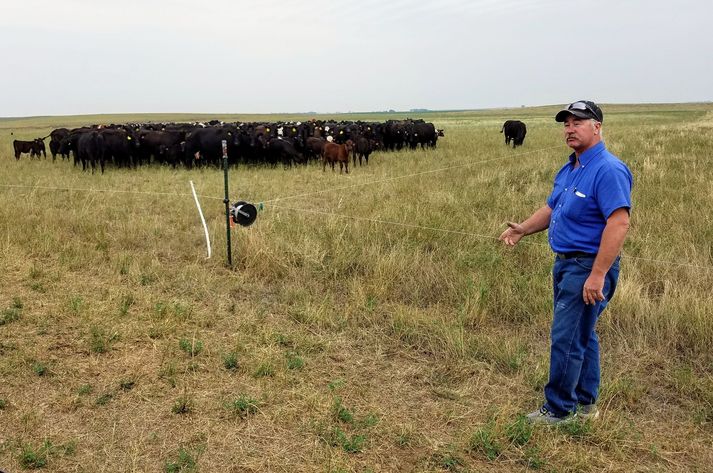 Sieck raises beef cattle, including a cow herd with calves born each spring. He practices rotational grazing. Instead of allowing cattle to graze on an entire pasture all season, a pasture is divided into smaller sections called paddocks.  Cattle graze in one paddock at a time, allowing the other sections of the pasture to regrow and preventing over-use of areas.

Sieck is just one of many South Dakota farmers and ranchers focused on soil health. He was a board member of the South Dakota Grasslands Coalition for a few years, and was part of the founding group and board of the producer-led South Dakota Soil Health Coalition when it was founded in 2015.  He served as board chairman and is currently a board member.

The SD Soil Health Coalition focuses on hosting events, programs and sharing information with farmers and ranchers to improve soil health across the state.  They host an annual meeting and soil health conference each winter which attracts around 400 people, whether it is in person or via video conference. The coalition also hosts a series of farm and demonstration plot tours during the growing season and a Soil Health School in the fall.

“We’ve had the most success with events where we include both professional and technical experts who can talk about technologies and management practices and the research behind them, along with the producers who can share their own real-world experiences,” said Sieck.  “The combination of technical expertise and on-the-ground perspective has built credibility and helped us provide valuable information.”