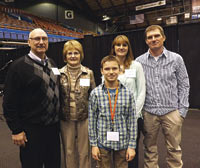 South Dakota dairy farmer Dave Hansen took a trip nearly 23 years ago that changed his life forever.  It has also changed the lives of thousands of children in one of the poorest country in the world.

In December 1989, Dave and his wife Jerilyn traveled to Haiti as part of a mission trip.  During that first trip, the group built a school.  He returned a year later to build desks for the school.  He also found a passion for helping children and communities in the poverty-stricken nation and began thinking of ways to continue helping, even if it was just one person at a time.

Dave and Jerilyn began working with Pierre Fritzner, a Haitian who they met on the first mission trip, to find ways to continue the work they’d begun on the mission trips.

They eventually founded “Helping Hands for Haiti,” an organization which now works in five communities.   Supporting schools is still an important part of their mission, including building schools, and helping students go to school by providing books, shoes, school uniforms, and school lunch.  The group is currently providing lunches to 900 students each day.  They also provide supplies to teachers and help with continuing education.

Dave and Jerilyn just returned from a trip where the group of volunteers completed and attended the dedication ceremony for a school in Savane a Roche.

Helping Hands for Haiti also  works with community leaders on projects to create jobs and economic opportunities for communities.  One example is a rice mill in Jumelle that now pays the teacher’s, caretaker, and cooks salaries, along with all the operating expenses of the mill and the employees there(16 total jobs created).

Dave has been dairy farming since the early 1970s on his family’s farm near Irene in southeastern South Dakota.  They have three grown children and eight grandchildren.  He continues to farm with his daughter and son-in-law, even as more of his time is dedicated to the charity.  They milk 135 dairy cows, and raise corn, soybeans and alfalfa on about 1,200 acres.  They also have about 175 beef stock cows that calve in the early spring.

He has seen many changes and evolutions in agriculture over four decades of farming, but the commitment of farmers to feeding the world hasn’t changed.

“As a farmer, our role is to produce quality products,” he said.  “It is becoming even more important that we also take the initiative to let consumers know that we are responsibly taking care of our livestock and are good stewards of the land.”

One of the most exciting things he’s seen is the progress made in the dairy industry to improve cow care and milk production, including the introduction of TMR (total mixed rations) that provide the exact combination of nutrients and energy to meet cows’ needs.

The greatest challenge he’s faced is determining what business and management practices his farm needs to adopt to stay profitable and ensure that the next generation has the opportunity to stay on the family farm.

He’s also seen the importance of agriculture to South Dakota’s economy and communities grow, noting the construction of a new cheese processing plant in Brookings and the opportunities that came with ethanol production in the state.

Opportunities to become involved with Helping Hands for Haiti are available through joining future mission trips as well as donating to support their efforts.   For more information, visit www.helpinghandsforhaiti.com or their Facebook page.