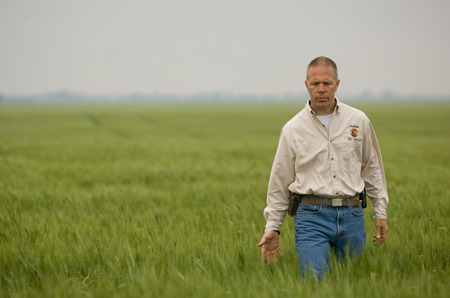 Chet Edinger has spent the past few months analyzing data and reports, then using that information to write detailed prescriptions to meet specific needs.  Sounds like a typical job description for a physician, right?  Only Chet isn’t a doctor … he’s a South Dakota farmer.  His prescriptions aren’t for patients, but for the fields where he will plant corn, soybeans, wheat or sunflowers this spring.

Chet farms near Mitchell in a partnership with his brother Charlie and father Wayne.

Advances in precision agriculture technology and farm equipment are allowing farmers to be more detailed than ever before in planting and harvesting their fields.  The data they gather each season allows them to make better decisions for the next year.

During harvest, yield monitors on combines can track how many bushels are produced in a field. Farmers use this information to create maps that show which areas of the field are most productive.  Many farmers also have soils tested to know exactly what nutrients are present throughout the field.

Using data collected over several years, Chet and his brother Charlie will spend the winter months comparing yield results with soil testing, then developing detailed “prescriptions” for which kinds of seed, fertilizer and herbicides will work best for each field, and at what rates.  Those prescriptions are programmed into precision ag equipment on tractors, planters, and sprayers and fertilizer applicators to make sure it is followed exactly.

By applying only the amount of fertilizers and herbicides needed, farmers can reduce waste, prevent runoff and preserve soils and water supplies for future generations. It is also more efficient, allowing farmers to produce more food using fewer resources.

“Farming is a family business as well as a food producing business.  If we take care of the land, it will take care of us,” said Chet.  “We try to be the best environmental stewards of the land so that we and future generations will be able to farm.”

Precision agriculture and technology has been a part of the Edingers’ farming operation for more than a decade and they continue to adopt new technologies and practices each year.  However, it is only piece of managing their farm.

“Even the best technologies don’t replace boots on the ground,” said Chet.  “You still have to go into the fields to look at the crops and see what is happening during the growing season.”

The winter season is also the time for farmers to work on business plans, budgets and marketing plans for the upcoming year.  They try to plan ahead as much as possible so they can focus attention on field work and crops during the planting, growing and harvest seasons.

“Our dad always gave us the option to farm if we would like, however we had to continue our education and work off the farm for a while first.  Once we gained more ‘real world’ experience we could come home and work on the farm.”

Chet worked at a bank for seven years and Charlie worked as an agronomist at a local cooperative for three years before they came back to the farm.  The skills they gained in those roles have been extremely valuable in their partnership, as Chet can take the lead on marketing and financial decisions and Charlie has a science and agronomy background.

Chet and his wife Jackie have four grown children.  He is also active with state and national farm industry organizations.  He has served on the South Dakota Wheat Commission since 2007 and served in several roles with South Dakota Wheat, Inc., and National Association of Wheat Growers.

“It is important for farmers to give back to their industry at some point in their career.  It takes everyone’s involvement and input to have a viable industry,” he said.

As the state’s largest industry, Chet sees agriculture as a driving force in South Dakota’s economy.

“South Dakota did not experience the level economic downturn that many other states did during the recent recession,” he said.  “The strength of our state’s economy is tied to a strong agricultural economy.”

However, even though agriculture is important to the state and rural communities, there are a number of challenges that farmers and ranchers must work together to address.

“As a farmer, I’m part of just one percent of the population that grows our nation’s food supply.  Unfortunately, there is a lot of misinformation being shared online and through social media that is not linked to sound science,” said Chet.