Farming for Today and the Future 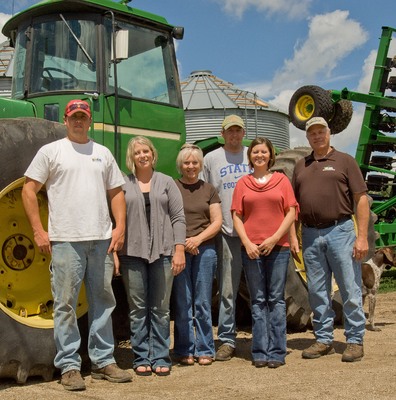 Lewis Bainbridge and his sons are the third and fourth generations to farm the land on their Davison County, South Dakota, farm. They work to not only produce crops and livestock today, but also to ensure that the land is protected and productive for many generations to come.

Lewis’s grandparents homesteaded in Tripp County near Ideal, SD, then moved to the family’s current farm near Ethan, SD, in 1919.  Lewis and his wife Charlene began farming with his father in 1977 after they graduated from South Dakota State University in 1972, and Lewis served five years in the U.S. Army.  Their sons Matthew and Neal have graduated from SDSU and returned to the family farm business.  Their daughter Heidi, also an SDSU graduate, works in the medical profession in Denver.  Neal and his wife Tara have two daughters, Charlie and Brynlee.

“It is truly a family farm,” said Lewis.  “We do the work ourselves with very minimal outside labor.”

The Bainbridges’ primary crops are ones that South Dakotans know well: corn, soybeans, wheat, and hay.  They also raise beef cows and calves.  However, they have added a number of lesser known crops to their rotation over the years as cover crops, including field peas, oats, millet, teff grass, turnips, radishes, and others depending on the goal for that particular field.

A cover crop is one that is planted primarily to protect the health of the soil.  Cover crops have grown in popularity as farmers look for ways to improve soil quality, reduce erosion, reduce compaction, suppress weeds, and more.  In many cases, cover crops are planted after one primary crop is harvested to protect the soils until planting time again.

“We’ve been experimenting with cover crops and the best way to make them work in crop rotations for a number of years.  We still have a lot to learn, but we are seeing numerous benefits for soil health and providing feed for livestock.”

For example, after wheat is harvested in the summer, the Bainbridges plant a cover crop combination such as oats, field peas, a brassica, and rape.  Not only does the new cover crop keep soil in place, it provides a source of feed for cows in the fall.

Lewis has also been working with Dr. Dwayne Beck at Dakota Lakes Research Farm on testing seed coatings for cover crops and other projects to find better ways to start cover crops in crops like corn and soybeans.

Cover crops are just part of the stewardship plan for the Bainbridges.  They have been utilizing no-till farming practices for nearly 25 years.  No till (tillage) farming means that the farmer doesn’t use a tractor and equipment to plow or till his fields.  This practice allows more organic matter to build up in soils, improving its health, reducing erosion and holding more moisture.

Livestock also play an important role in the farm.  Lewis and his sons maintain a cow herd and feed the  calves until they weigh about 800 pounds.

“We have a fair amount of acres that are not suitable to be farmed, so they are in pasture grass.  We are trying a number of things including cross fencing and solar watering systems to manage the pasture and grass so that it will be sustainable for the future,” said Lewis.  “We are still learning and keep improving our practices.”

For Lewis, the most rewarding aspect of farming is working with his sons and family and helping them carry on the family’s focus on stewardship.

“I had the opportunity to farm with my dad for 18 years.  It was a terrific experience, and I appreciate that he allowed me to try new things and make a number of mistakes, especially as we transitioned to no-till crop farming,” said Lewis. “It is now gratifying to me to see my sons working out how to best raise cover crops to be even better stewards of the land.”

Being involved in agricultural and community organizations is also important to the Bainbridges.

Lewis and Charlene began their involvement when they first returned to the farm, with membership in South Dakota Pork Producers Council, as founding members of South Dakota Corn Growers, and by serving on South Dakota Soybean Research and Promotion Council.  Lewis now serves at the national level on the United Soybean Board.

Matthew is now on the board of the South Dakota Soybean Council and Ag United for South Dakota.   Neal, Tara, and girls are part of the Hungry for Truth campaign which shares information about modern agricultural production.

Lewis, Charlene, and family are also very involved with South Dakota State University and are excited to see the growth and recent investments in agriculture and livestock programs at the university.