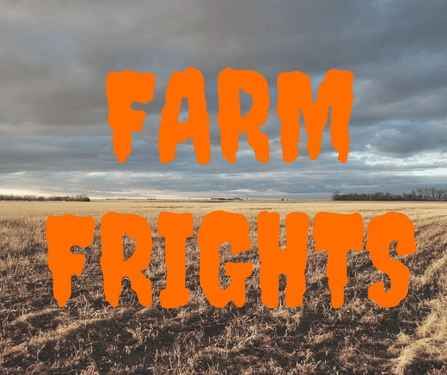 Tonight many people are getting their Halloween frights by visiting a haunted house. The best haunted houses are empty farm houses in the middle of nowhere. You’ll find that farmers aren’t scared by simply by walking through an old farmhouse, because most farmers live is a house in the middle of nowhere! However, in your average farmhouse there’s significantly less ghosts and gouhls, and probably less cobwebs and dust (depending on the season).  Most farmers I know are pretty fearless, so I compiled a list of the things I know that can scare any farmer.

1)    Low commodity prices. After a few years of seeing record high prices for meat, milk, and crops, farmers are now faced with low prices. Most of us know exactly what our income for the next year will be, but a farmer’s income is almost never the same. That is something that could scare any of us! Uncertainty is part of the job on the farm, but good farm managers do as much as possible to mitigate the risk. Taking out crop insurance, and buying futures on cattle can help make a down year slightly better, but there are still some years where farmers may not make any money. Working all year for no money would make me scream just as loud as if I’d seen a ghost!

2)    Getting crops planted / harvest too late. All farmers have an idea date of when they would like to get the crops in the ground and harvested, but it seems that Mother Nature almost always has a different idea. This year, rain delayed planting AND harvest. While getting crops in the ground later might seem annoying, it can also have an impact on the growing season, and ultimately the harvest. More than that, there is also a deadline for planting for crop insurance. If you don’t get seeds in the ground before the insurance date it doesn’t matter what happens during the growing season, your fields won’t be covered. As far as harvest goes, I remember one year when we were combining in the snow. That memory sends shivers down my spine, and not just because it was cold. That’s a sight I hope to never see again!

3)    Equipment breaking down. Whether it’s the feeder wagon or the combine, I can guarantee that there is never an opportune time for equipment to break down. When a farmer is out in the field, they are usually working at all hours to complete their task. This could be so that they beat the rain, or just so they can move on to the next field. Either way, a delay is not welcome. If a piece of equipment breaks that involves feeding animals, the farmer has to come up with a solution quickly to make sure the animals get their next feeding on time. Hopefully their equipment dealer or neighbor will be willing to loan them one until their own is fixed! No matter what piece of equipment it is, machinery breaking down is a nightmare no farmer wants to deal with.

4)    Mean mama cows. This is last on the list, but definitely not least. All farmers know that a cow (or other animal) that’s just had a baby can turn from your best friend to your worst enemy in a matter of seconds. Tagging, weighing, and caring for a newborn animal usually fun, but a farmer is always on their guard. Just last spring, my dad had his four-wheeler tipped over as he was trying to get of the way of a new mama. New babies are always adorable, but seeing a mad mom start running towards you will scare you more than anything you’ll find in a haunted house on Halloween.

This is a short list, but that’s because farmers are some of the toughest people we know. This Halloween we’re wishing no tricks and all treats to our South Dakota farmers!

Did you miss this week's radio segment? Listen now!10.31.16_Farmers_Daughter_-_Farm_Frights.mp3