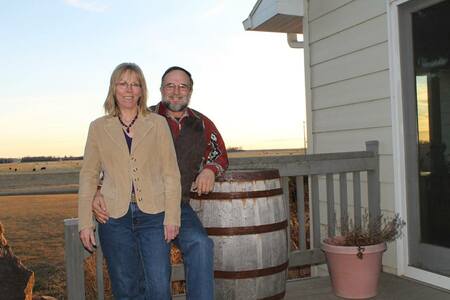 Food is at the heart of many holiday traditions, from Christmas cookies and candies throughout the season to Grandma’s special recipes during family gatherings.  For many South Dakotans, a Christmas ham is at the center of their holiday table.

Ferlyn and Karen Hofer, are one of the more than 900 South Dakota pork producer families whose work helps make Christmas hams (and a multitude of other pork products) possible for holiday celebrations in South Dakota and beyond.

Ferlyn grew up on his family’s farm near Canistota, South Dakota.  They raised pigs and crops for animal feed. When he graduated from high school in 1978, he started his own farrow to finish (where pigs are raised from birth until they are ready for market) farm about a mile from his parents’ farm.  He expanded his farm in the early 1980s to raise 150 sows and built a new farrowing, nursery and finishing barn.

Ferlyn and Karen married in 1987 and over the years, they grew the sow herd to 350.  They purchased the original farm where Ferlyn grew up and now the farrowing barn is located there, with the nursery and finishing barns are at the farm that Ferlyn started.  They raise corn and soybeans and have a small flock of sheep that usually have their lambs in February or March.

Karen also grew up on a farm about four miles north of the Hofer farm.  Her family raised crops and cattle.

“Growing up, I had three brothers, so I didn’t do many of the farm chores and had never been around hogs. But after Ferlyn and I were married, I started to help with almost everything around the farm,” said Karen, noting that she especially enjoys caring for the youngest animals on the farm.

“Whether it is pigs or lambs, I think it is just an instinct that takes over when it comes to taking care of newborns,” she said.

Ferlyn and Karen’s three sons grew up helping at the farm and are still involved today.  Ryan is a full time electrician and crop farms with his parents. Tyler owns a welding/manufacturing business on the farm, and Nolan works full time on the farm.

“We are privileged that our sons want to be involved with us on the farm. The family bonds are strengthened when everyone has a part and works together,” said Karen.

Both Ferlyn and Karen are active in the South Dakota Pork Producers Council, with Ferlyn serving on the executive board and now as 2nd Vice President.  Karen volunteers on the Trade Show Committee.

“It gives me the opportunity to visit with people across the state about cooking pork, but more importantly, about what we do on our farm and why,” she said.  “It can be challenging because there is a lot of misinformation about misconceptions about how we raise our animals.  Since agriculture is our livelihood, we strive to take care of our animals and land the best we can.”

The Hofers are proud of the role that pork producer families play in providing nutritious, affordable food for South Dakota tables, but also recognize that agriculture support the state in many other ways, too.

“Agriculture is our state’s #1 industry. It is the base for our tax structure that builds and funds schools, roads and brings growth to our main streets,” she said.  “The farmers and peoples that work in related businesses live and spend money in their local towns. When your local economy is healthy, your state economy reflects that.”

The holidays are also a time to celebrate family and food for the Hofers. Karen’s brothers and their families also farm in the area, so most of their family members live within a five or six mile radius.

“We take turns hosting holiday get-togethers,” she said.  “When it is our turn to host a family gathering, everyone knows to expect a pork dish.”

Pork tenderloin is always a favorite, and All Star Pork Meatballs are great for large gatherings, said Karen.

Whether your holiday table will feature a Christmas ham, pork tenderloin, you can find hundreds or recipes and helpful pork cooking tips at PorkBeInspired.com.