Bruce Burkhart Recognized as AgVocate of the Year

SIOUX FALLS, SD – Bruce Burkhart of Dell Rapids, South Dakota, was named AgVocate of the Year by the board of directors for Agriculture United for South Dakota at the organization’s annual luncheon December 12 in Sioux Falls.  The third annual AgVocate award recognizes South Dakota farmers and ranchers for their work in sharing their story of modern farming with the public.

Bruce and his wife Julie own and operate a diversified crop and livestock farm, raising hogs, cattle, corn and soybeans on land that has been in their family for 99 years.   Bruce was involved in chores on his family’s farm throughout high school, and began farming full time in 1981 with his father, Wayne, and brother, Brian.  In the mid-1980s, the Burkharts began a 125 sow farrow-to-finish operation, then built hog finishing barns in 1998 and 2008.  Currently, Bruce is farming with his sons, Brandon and Jase. They raise 250 beef cows and calves each year in a hoop barn and operate two 2000-head hog barns.

Bruce was one of the first Ag United volunteers and supporters, appearing in television advertisements introducing the organization in 2005.  He has volunteered in a number of roles over the years, including the Adopt a Farmer program, where he records and sends monthly video updates to fourth grade classrooms throughout the school year.  He also hosts yearly tours for Augustana University students at his farm.

“I started volunteering with Ag United in 2005 because I knew I wanted to be part of the team doing this important work for South Dakota’s farm families,” said Bruce. “An organization takes everyone’s participation to be successful.  It’s all about teamwork.”

Bruce and Julie Burkhart have five children:  Brandon and Jayce are part of the family farm business; Katie was an officer in the U.S. Navy and now works for a U.S. Senator; Jenny will graduate from South Dakota State University in May 2017 and Abigail began college at SDSU in fall 2016.  Julie Burkhart worked with Bruce on the farm for 20 years, then earned LPN and RN degrees and works at Avera in Sioux Falls.

“Bruce and his family are tremendous advocates for South Dakota’s farm and ranch families,” said Richard Vasgaard, Centerville farmer and president of Ag United.  “He is always willing to answer any question that comes his way from elementary students, college students or teachers.”

Bill Even, a native of Humboldt, South Dakota, and current Chief Executive Officer of the National Pork Board, delivered the keynote address at the annual luncheon.  He shared an update on the pork industry in the U.S. and South Dakota, and its impact on the economy and rural communities.  He also encouraged South Dakota farmers and agriculture professionals to continue investing in livestock production in the state, noting it provides opportunities for young farmers and ranchers and drives economic growth.

Ag United marked its 12th year of supporting South Dakota farm and ranch families and rural communities at the event.  Since its founding, Ag United has enabled more than 24,500 consumers to visit South Dakota farms and connected with nearly 10,000 students though Adopt-A-Farmer and National Ag Week programs.  In addition, Ag United staff have assisted families in 32 counties with permitting and zoning issues.  Visit www.agunited.com, South Dakota Farm Families on Facebook, or @SDFarmFamilies on Twitter for more information on the annual luncheon or Ag United’s activities. 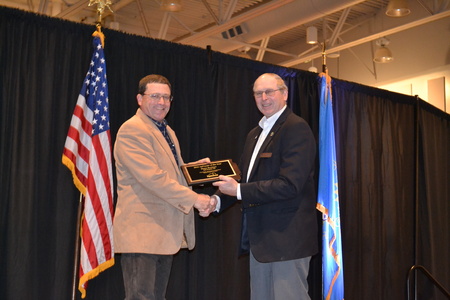