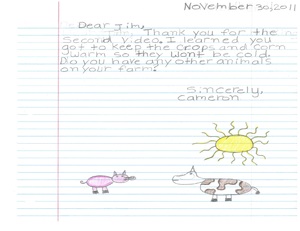 This past year I help take monthly videos of two local dairy farmers near Brookings as a part of Ag United’s “Adopt A Farmer” program.

As a part of the “Adopt A Farmer” program, fourth and fifth grade classrooms in Clear Lake, Sioux Falls, Humboldt, Harrisburg, Rapid City, and Yankton adopted area beef, dairy, and hog farmers.  Every month the farmer would send a video update on what was happening on the farm.  The classes also go to meet the farmer when he or she visited the classroom.

Cheryl Prunty teaches fourth grade at Humboldt Elementary in the West Central school district.  She was raised on a farm, and currently farms with her husband and sons.  However, only a handful of students in her classes each year are familiar with modern agriculture.  She always looked for way to talk about agriculture and farming with her students, so she was excited to participate in a new program that would bring a real-life South Dakota farmer to her classroom several times a year. 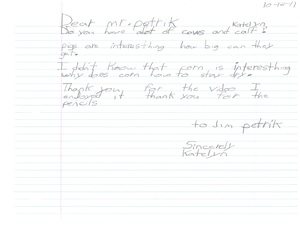 Teachers whose classrooms participate in this program use it to incorporate real life math, social studies, economics, and English into their programs.  Many students wrote letters to their adopted farmers asking them questions to be answered in the next videos.

This program is an excellent opportunity for students who do not have farm connections to learn how their food gets to the store and that it does not just show up.  There is a lot of hard work that has to happen before food gets to the store.  Having grown up on a hog farm myself, getting the chance to video tape two dairy farmers, I think I learned as much as the students did.

Ginger Post was one of the two women who allowed me to come to their farm and take the videos.  Ginger showed the students around her family’s farm near Volga, and talked about all of the work that goes into keeping their farm running.  She talked about milking and feeding the cows and how her children help out as well.  In one video Ginger’s milk hauler even made an appearance, and shared how the milk gets from the farm to the store. 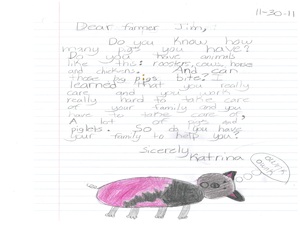 Olga Reuvekamp showed students in a Spanish immersion school in Sioux Falls how they care for 2,100 dairy cows.  She showed them each barn and their milking carousel which is a very efficient way to milk all of their cows.  Since the students who viewed the videos went to a Spanish immersion school, some of the dairy’s employees who spoke Spanish talked about their jobs on the farm in Spanish to the students.

A highlight for both dairy farms included: how baby calves are cared for and how they use manure to fertilize their crops which will eventually help feed their cows.

Troy and Stacy Hadrick shared their videos with students in Harrisburg and Sioux Falls of activities that take place on their family’s ranch near Faulkton.  The Hadricks made a visit to their classroom with their young kids, who were also very involved in the videos and answering questions at the school.

Ally Petrik of Gayville took videos of her father Jim and showed students in Yankton and Rapid City around their cattle and hog farm.  Jim talked about how they grow crops , the equipment they use, as well as how they care for their livestock.

Students sent MANY letters to Jim and the other “adopted farmers” sharing what they learned and asking questions about the farm.  I have posted a few of those letters on this blog.  You also can view some of the “Adopt A Farmer” videos here.  ENJOY!